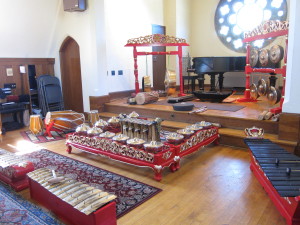 The Catskill Mountain Gamelan brings Indonesian music to the Hudson Valley through music, song and dance.  There are three separate Sundanese (West Javanese) music ensembles, each directed by Dorcinda Knauth with performers from the Hudson Valley.

Sekar Mawar (the Rose Blossom gamelan) is a degung gamelan built in 2012 by the Bandung builder, Asep Ahum. It is named after the rose, the state flower of New York, and for its red and gold coloring. Sekar Mawar musicians perform both classical and popular Sundanese music styles.

Sekar Ligar (Falling Rose Petals) is a kacapi suling (zither and flute) ensemble that performs both traditional Tembang Sunda repertoire from the West Javanese highlands, as well as a lighter style of music called Pop sunda. This ensemble takes its name from the larger ensemble group, Sekar Mawar, as the patterns of this type of music are derivative of gamelan music.

Gamelan Geduh (a River in Bali) is a slendro ensemble, designed and built by instrument builder Christopher Andersen while he was contemplating his art on a river on one of his many trips to Bali. The gamelan takes its name from that moment of creative inception.  This ensemble primarily plays dance music and music to accompany Sundanese puppet theater, wayang golek.

The word gamelan refers to a set of instruments, made usually of bronze or iron, and comes from the island nation of Indonesia. Our ensembles are specifically Sundanese, a culturally rich ethnic group in West Java. Gamelan orchestras are unified by their tuning system (no two gamelans are tuned alike!) and the color of the instruments.  There are many types of instruments in a gamelan, including gongs, metallophones, xylophone, drums, flute, bowed and plucked string instruments, and voice. The organizing form of the music is said to be colotomic, which means that each instrument has a unique role in creating the overall sound. Some instruments are time-keepers, others play structural melody, and still others create ornamental patterns to elaborate the melody. Each instrument is equally important in creating the overall sound of the music–there are no soloists in gamelan!

Traditionally, gamelan music is heard at life-cycle events, like weddings and coming-of-age ceremonies. It also accompanies multiple dance forms (such as tari klasik and jaipongan) and puppet theater, called wayang. Nowadays, it is common to hear gamelan music on the radio, at special concerts just for gamelan enthusiasts, and as a background to film scores.  It was even featured in the 2013 Oscar-winning film, “Life of Pi.”