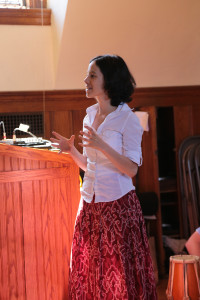 Dr. Dorcinda Knauth is a performer of West Javanese classical music and dance. She has participated as a musician in Javanese and Sundanese wayang (puppet theater) and in numerous dance and instrumental concerts. As an ethnomusicologist, her work has allowed her to travel to Indonesia on multiple occasions, and she has received grants for research and music performance from organizations including Fulbright and the Henry Luce Foundation. Currently, she is the director of Gamelan Sekar Mawar (Rose Blossom Gamelan) and Sekar Ligar (Falling Rose Petals flute and zither ensemble).

Andrew “Andy” Bouchard and Rina Oesman worked with Catskill Mountain Gamelan musicians in June and July of 2013, teaching Degung Klasik and Tembang Sunda. Originally from California, Pak Andy has lived in Bandung, Indonesia since the late 1990s, where he originally specialized in playing the Sundanese violin, rebab. Ibu Rina is a renowned tembang vocalist, having won multiple honors for skill in the Cianjuran genre and for her beautiful singing voice.